Last week, two ladies from the fourth floor got a chance to check out some live music at XM Radio’s Verge Music Awards. They won all-access passes to see fourth floor faves Tokyo Police Club and Gord Downie perform at The Mod Club (thanks, beat scene!).
The night was great – busy, good music and lots of buzz about the awards (all of which came with a nice cash prize.). Zeus, formerly Jason Collett’s back-up band, took home the coveted Album of the Year, beating out bands like Arcade Fire, Stars, Broken Social Scene and Hot Hot Heat. 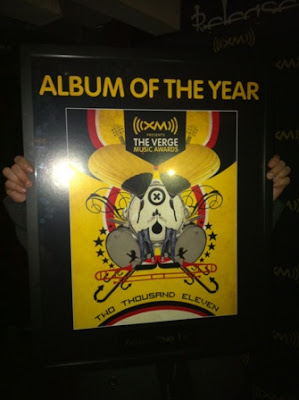 Tour manager Jeremy proudly holding the “Album Of The Year” award.
The band was thrilled with their win, and Neil Quin and Mike O’Brien were more than happy to chat with us about their upcoming plans. They’re taking part in Canadian Music Week, playing tomorrow night at The Horsehoe Tavern at 12:20 a.m. They played to a packed house last year, so this show is sure to be just as busy, especially with their latest coup.

Next, they’ll release their double-sided single Permanant Scar/The Darkness in April on Arts and Crafts. Permanant Scar is a “harmony-laden rock and roll” track, while The Darkness is described as “a thoughtful and moody track”. Can’t wait to hear it, and the new album they’re recording this October. 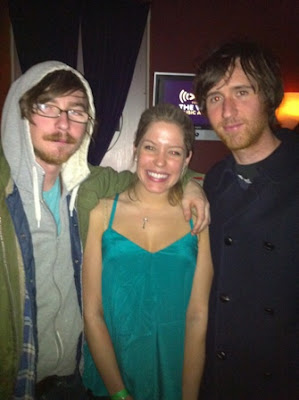 Neil, Christina and Mike grinning from ear-to-ear after the win is announced (well, at least Christina is).
We spent the rest of the evening just chatting with them about life in general, including a serious discussion about brunch in Toronto. We were fans before, but are bigger fans now after getting to know them a bit. Here’s hoping that they continue to be recognized for their great music.

Stream Zeus live here, from CBC Radio 3, and find out for yourself what all the hype is about. You won’t be disappointed.