If you’re a regular reader of our blog, you would know by now that we like to eat. So when 416 Snack Bar (181 Bathurst Street) opened up just a hop, skip and a snack away from the fourth floor, we were one of the first to check it out.
The transformation from Johny Banana is pretty complete – it’s tough to recognize it as the same space. Owners Adrian Ravinsky and Dave Stewart have done an amazing job making it a cool local bar. They even chronicled the transformation on their site (check it out here). 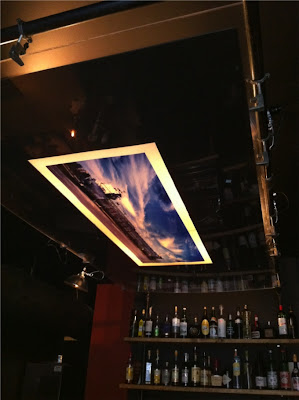 Very cool photo installation on the ceiling.
Longtime friends, Ravinsky and Stewart both grew up working in the restaurant industry (most recently at Buca), and basically held every job in the business – from bus boy to server – except in the kitchen.
The concept for a snack bar versus a regular restaurant was inspired by a trip Ravinsky took to San Sebastian in Spain. Small local restaurants served communal platters of snacks called centros (shared platters of ham, squid and other treats), which was exactly what he wanted when he was enjoying beverages, rather than a full meal. They figured that everyone wanted savoury, delicious snacks while drinking, and not many bars in Toronto did that. They were pretty bang on. 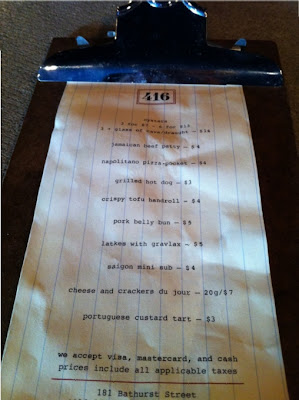 It’s a great idea, and all of the items on the menu are delicious. The hot dog is house-made from beef short ribs and a bit of pork back fat for flavour, as is the tangy sauerkraut that tops it. The Napolitano pizza pocket is similarly made at the restaurant, including the dough, and is stuffed with fresh mozzarella, basil and tomato sauce. Both were a perfect size to accompany a freshly poured pint of Hoptical Illusion.
Ravinsky and Stewart try to make as much as they can themselves, and you can taste the difference (clichéd, but true). They plan on switching up the menu regularly to take advantage of seasonal produce. There was talk of a grilled asparagus dish and their version of a Caprese salad. Yum. 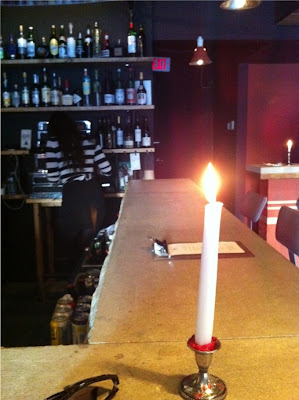 The cozy bar
Another fun fact that sets them apart? A no-cutlery rule. Every snack has to be able to be eaten by hand, which will be an interesting challenge for the Caprese salad (maybe it will be skewered?). But we’re definitely hooked enough to come back and find out just how that works.
This little spot is casual-cool, unpretentious and tasty. Just the way we like our snacks and our local watering hole.