When we think of road rage, these are the things that come to mind: drivers flipping the bird, blaring horns, or our personal fave, flailing hands in the rear view (the WTF of driver sign language).

If you’re a biker in this city, you know that road rage goes beyond people who drive cars, and well into bike lanes and beyond. 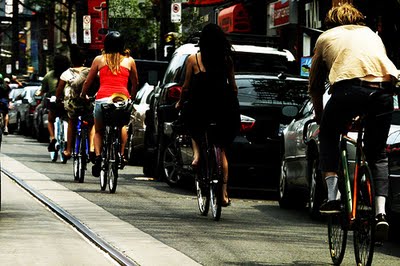 As much as we adore cycling (well, some of us – half of the office raves and the other half reels in fear), biking in a city is cause for grey hairs. Cyclists have road rage against each other (there’s nothing more frustrating than biking behind a slow cyclist) and cars (move. over. Your car is way too close for comfort). Here are some more thoughts and experiences, brought to you by the fourth floor.

From a new cyclist:
Dear pedestrians,
Look for bike traffic when you’re stepping out into the street. You wouldn’t just run out and hope for the best when a car was coming, would you?
Why would you do the same when a cyclist is riding down the street? I’ve seen some people get seriously slammed by a biker, then yell at the biker for not stopping. Pedestrians hold some of the responsibility too!
Love, Toronto bikers
Dear (other) cyclists,
Act like cars! You can’t have the best of both worlds, following road rules when it’s convenient, then following pedestrian rules when that’s the better option.
Stop jumping up to bike on the sidewalk because traffic is stopped. Stop blowing past cars on the right when they’re turning. If you were driving a car you wouldn’t do either of those things, so why do them when you’re on a bike?
Love,
(responsible) Toronto bikers

From a seasoned cyclist:
My beef is with other bikers. Wearing your iPod is just ridiculous. Scooting between lanes: also ridiculous. Cyclists have blind spots too. Check them. That’s all. This is raising my blood pressure. Wear a helmet. It’s the law (well, at least if you’re under 18) and it can save your life.

Don’t get us wrong: there’s no better feeling than the sun on your back and the wind on your face when cycling. We have smiles plastered on our faces the entire time, not even minding the occasional bug plastered on our front tooth as a result. We just needed to let off a little pent-up steam.

We know you have beefs with cyclists, whether you’re a pedestrian or a driver. Share them, it will be cathartic. Tweet us @rockitpromo or comment below.