You may have noticed us tweeting lots of interesting facts and quotes about Mark Rothko lately, or seen our cryptic images with ExperienceRed.ca hidden somewhere in the photo.
We’ve been excited about working with Canadian Stage on their very cool production of the Tony Award-winning Red, a play about the notoriously cranky, temperamental, talented Abstract Expressionist painter, Mark Rothko.
If you haven’t seen the show yet, you still have a week to catch it – it ends this Saturday. In the meantime, we took a trip backstage to get some inside scoop about the magic used to stage this captivating performance.

Photos of the set of Canadian Stage’s Red. Designed by David Boechler.
The actors drink the liquid in the Johnnie Walker bottle each night, but it is caramel-coloured water, not booze (it really does seem like scotch while they’re drinking). In addition to drinking it, the actors have used it to put out smoking cigarettes during a scene – a quick fix to a potential on-stage problem.

Jim Mezon as Mark Rothko in Red. Photo by Bruce Zinger.
The cigarettes are vanilla herbals – Jim Mezon as Rothko smokes multiple herbal cigarettes per show (and butts them out on stage).

The set was created to look just like Rothko’s real-life studio. Almost all the prop pieces and details were distressed and painted to look as though they’ve stood the test of time. All the tools and props in the entire set were chosen based on research about Rothko’s style of painting and how he worked.

This goes for costumes, too. Over the course of the play, the stage/set pieces get even more authentic because the actors use real paint on stage.
There are three different types of “paint” used in the show (all of it theatricalized):
1. Paint for painting the canvas on stage (there are several scenes where Rothko and his assistant paint live): it’s designed to be vibrant and like paint, but is actually thinned/mixed so that the actors can paint a giant canvas in under two minutes.
2. Paint for the “blood” scene (no explanation, lest we spoil it for you!): as this paint is used on the actors, it is mixed heavily with laundry soap so as not to stain/ruin their costumes.
3. Paint used to mix on stage: uses real painter’s pigment with other substances to mix the right shade of red in the show – this can get tricky, because some of shades of red can look pink or orange on stage. 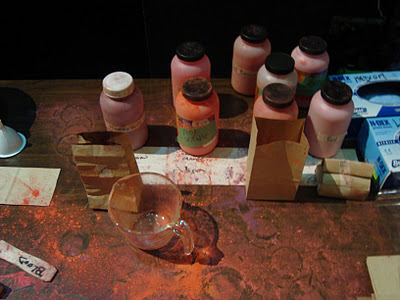 There is also a paint mixing station backstage, and the crew is always on call to touch-up, clean up or re-mix any of the paint types used by the actors on stage. It’s a messy job.

The actors also get covered in paint splotches during various scenes, but have to do crazy quick changes backstage, in the dark, in 30 to 60 seconds… so, they could be covered in red paint, but have to change an outfit, clean their face, then get back out on stage for a scene that is “six months later”.
Each costume worn by the cast has three duplicates (Rothko wears three to four outfits, with three versions of each outfit) to ensure that paint doesn’t stain; ironically, a few of these costumes were purposefully paint stained.

The record cases are of the actual records of the songs played on stage – it is all about the details. But the record player needle never actually touches the record itself. All the sound cues are called by the stage manager from the booth, where they control the sound and lighting of the show, at the back of the theatre. As the actors move and speak on stage, the stage manager watches and calls cues based on their activity, while for the audience, it seems as though it is happening in real time.

There are so many nooks/crannies of each of Rothko’s tool tables, that some aren’t even seen by the audience. The “Cleaning Solvent” is one of these – it just exists for authenticity or in case a set piece is turned and someone gets a glimpse. Who knew?
Make sure to catch this thought-provoking, arty production before it’s too late. Hint: if you visit the ExperienceRed.ca site and try your hand at being Rothko’s assistant, you’ll find a code at the end that let’s you save 20% off tickets.
Finally, watch our @rockitpromo Twitter feed today for a chance to win tickets to closing night. #experienceRed