We’ve already shared the contents of our makeup bags, and now we’re giving you a sneak peak into the fridge On the Fourth Floor. We have some major peanut butter and banana sandwich fans, a few take-out girls and a couple of soup fanatics.
It was a busy week On The Fourth Floor – we had a few events, a sick boss, lots of gift guides to work on and, of course, the beginning of Hanukkah. Needless to say, some of our usual homemade lunches were replaced by yummy local take-out. PR is busy, and having great lunch spots close to our office is so nice! 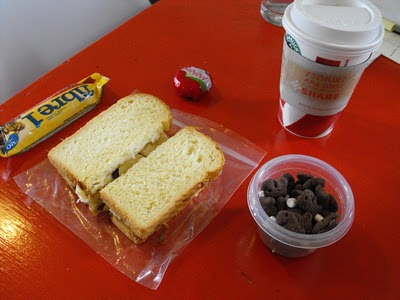 Carly packed a wholesome lunch, complete with a Fibre 1 bar, mini Babybel and best of all, a classic peanut butter and banana sandwich. Yum. Her lunch is never complete without a Starbucks to polish it off. 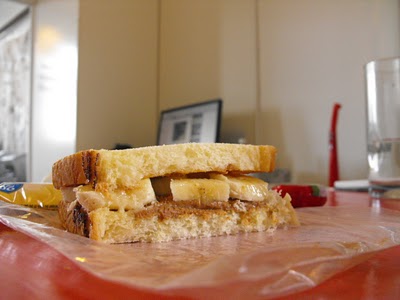 Classic PB&B.
Alana has delicious homemade meals for lunch nearly every day, but today she opted to bring in take-out Sorn Thai red beef curry instead (remember her earlier rave?). The amazing smell left Carly a little less impressed with her sandwich. 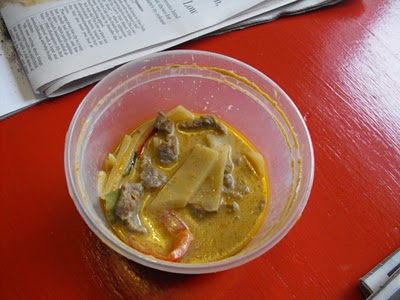 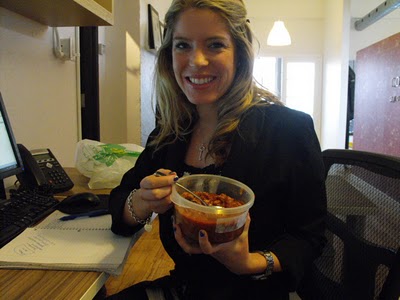 Since being newly engaged and a recent homeowner, Christina has turned over a new, homemaker-ish leaf. Christina has lots of big ticket things coming up next year (wedding, closing date on a home), so she’s on a budget and tries to bring lunch every day. She made a delicious spicy chili, which despite our previous experience, did not make the office smell badly. It smelled home-y and welcome on a cold, grey December day. 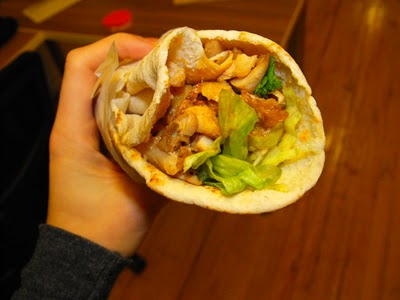 Abby also enjoys bringing lunch from home, but working late at the Oliver Spencer launch party the night before meant sleep was more of a priority than packing a lunch. She went for a chicken shawarma from Falafel Queen. 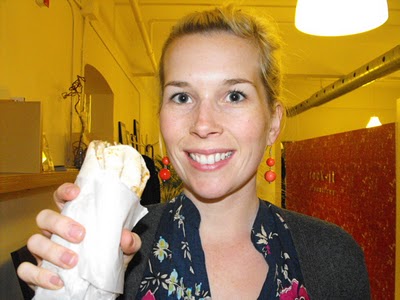 It was filling, delicious and the spicy sauce provided a much-needed wake up, too. 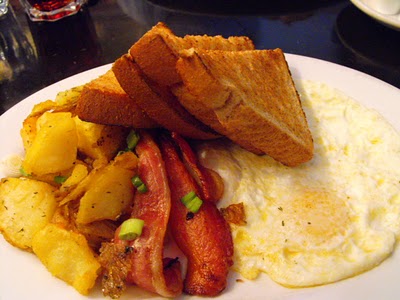 Lisa and Michelle are the take-out type, and ran across the street to Shanghai Cowgirl for a breakfast-for-lunch. Shanghai Cowgirl serves up quick, tasty food at good prices. Lisa had the classic eggs and bacon. Normally, though, her lunch is a slight variation of this: 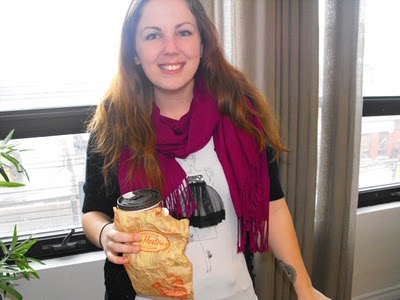 Tim Horton’s should give her stock in the company!
Michelle went for french toast and homefries, complete with powdered sugar. 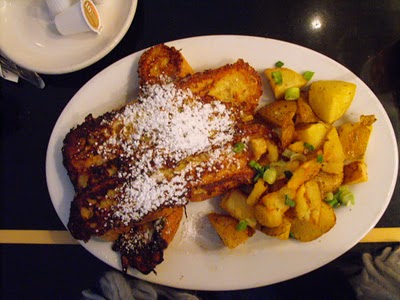 Rachelle is a busy mom to the adorable lil’ Oliver, so packing a lunch doesn’t always happen. She’s a healthy eater so she went for a fresh bowl of pho with noodles, veggies and tofu from Pho Phuong on Queen West. 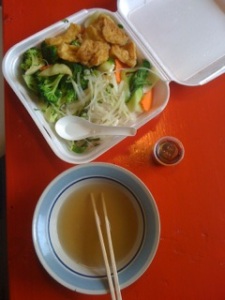 The bonus of this yummy lunch? One serving was enough for two lunches. And soup is always better the next day. Now, that’s value.
Finally, Lara went healthy with Kashi cereal and almond milk, plus an apple. This pretty much sums up her daily lunch, even down to the Starbucks coffee for dessert. 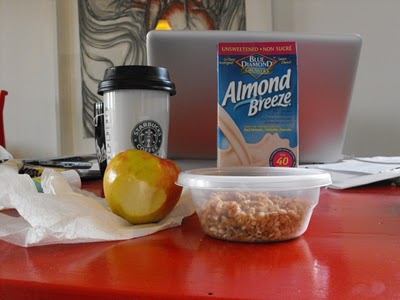 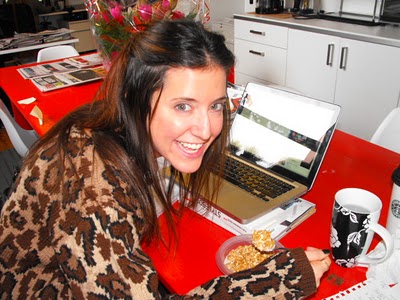 Lara happily munching her cereal at her workstation.
Look for her Meet Our Team profile coming soon!
What are your lunch must-haves? Do you brown bag it, or rely on a steady supply of take-out? Tweet us @rockitpromo!

Kate Boland was born in Toronto, and you may have heard of her – she starred in Daydream Nation, which premiered at the 2010 Toronto International Film Festival, to critical acclaim. She’ll appear in the upcoming film Die (2011). Boland has previous roles in Atom Egoyan’s Adoration, as well as numerous other roles.

She has been nominated four times for a Young Actor’s Award, and won Best Leading Actress for Salem Witch Trials in 2004.
When she’s not acting up a storm, you can find her writing for such outlets as blogTO. 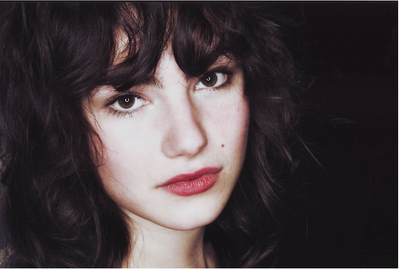 What do you do?
I am an actress, and when I’m bored, I’m a writer/student/filmmaker/overall lover of life!

How long have you worked with rock-it promotions?
I first met Deb on a photo shoot six years ago, and I was taken by her professionalism and grace. I love her so much, and I am so lucky that we’ve floated in and out of each others lives for more than half a decade!!

What do you love most about your job?
I think my defining characteristic as a human being is my curiosity. The world and people in it have always really fascinated me. What I love about being an actress is that I get to live inside other people, to adopt the way other people think, to find answers for all my questions. I love that I get to study people and relationships, while being creative. I also really love the wonderful people I get to meet on an almost daily basis. People in the film industry, actors, writers, filmmakers, are generally so passionate, fascinating, interesting and complicated. I’ve met the most exciting people and I feel I have a charmed life.

What do you like the least about your profession/industry?
Waiting for people to hire me! The waiting is really hard for me because I like to keep busy. I guess ultimately it’s the uncertainty. There are no guarantees that I will ever work again. AHHH!!!

What’s your next big goal?
Well, ultimately it’s to get another job, haha! But I really want to be on an American cable show, like Mad Men. I’d like to get my books published. I also want to find a Canadian novel to adapt into a screenplay. Do a play in New York. Laugh more! Have better hair!

Why is PR important to you (and what you do professionally)?
I think PR is hugely important to any actor’s career. Canada has no star system, so it’s up to the actor to try to create some kind of public awareness. Personally, I wouldn’t have my green card if it wasn’t for rock-it promotions. The American government needs to see press to think you’re worthy of working in their country.

Without publicity, I wouldn’t have been able to expand my career into America and I wouldn’t have the fantastic opportunities I’ve been afforded. Its all thanks to publicity. I also noticed that after working with rock-it, people seemed to be more aware of who I was and what I was doing. Also, it makes the day-to-day behind-the-scenes stuff WAY easier and more fun. I wouldn’t be able to keep everything together, to remember everything I had to do, without rock-it.

Any other thoughts you want to share about your public relations experience?
I think Emily Hampshire said it best, “I’d rather be a prostitute than be without you pimps.” I LOVE HER. Honestly, working with rock-it is one of the best parts of my professional life. I don’t know what I would do without you guys.