Seeing as how today is the international day for lovers, we decide to make a slight deviation to our Media, Darling column and feature one of our favourite media couples: Roz Weston and Katherine Holland.

Former
Howard Stern intern, Roz Weston started his on-air career as the host of
Toronto’s first live, late night talk show Last Call. From there, Roz eventually made the move to entertainment reporter on Global TV’s ET Canada, alongside hosts Cheryl Hickey and Rick Campanelli. He starts every day off bright and early on the Kiss 92.5 morning show Roz & Mocha. Roz’s better half is Katherine Holland, photographer and contributing editor to Toronto’s Vitamin Daily. This bubbly, rock n’ roll couple are parents to the adorable Roxy Alabama. Today they share their insights on navigating the world of love, journalism and the Hollywood Pass. 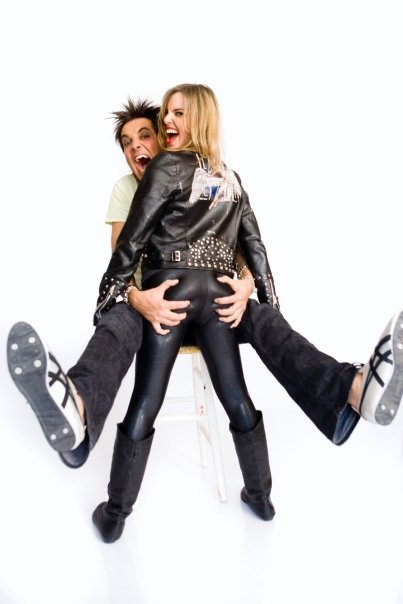 
Did you meet because of working in the media industry?

How do you manage your schedules to ensure you have enough family time and
romantic time?

ROZ: I don’t think you can. It’s impossible to manage getting up at 4 a.m. for
five days straight, then be told to get on a flight for three days at the end of the
week. But when I’m home, I’m ‘home’. I don’t go out and I rarely socialize
during the week. Family time is whatever you make it. Katherine still picks me
up from work every night with our kid – so some of our funnest times are
singing songs together while stuck on the DVP. You make it fun.
KATHERINE: I don’t know how much we ‘manage’, we just
prioritize. When we’re not working, we’re usually together. It’s as simple as
that. I love being near Roz, and when we go a couple days without seeing each
other I feel like my heart stops working.

Where would you like to be five years from now?

ROZ: Still with the woman who loves me… Only a fatter, greyer, more tired version
of me.
KATHERINE: I want to be five years better in my work, five years older, and
sharing Valentine’s Day with my 8 year old (OH MY GOD) and my Roz.


Do you think being partners in the media industry presents any unique
challenges?
ROZ: For sure, when neither of you work 9-5, weeks can fly by without any
structure. Not to mention that both our jobs come with a ton of homework.
KATHERINE: What he said.

Conversely, what benefits are there to working in the same industry?

ROZ: The understanding that there is zero routine, and we’re both cool with
that. Totally cool. I’m proud of Katherine’s work, and her work ethic. I
wouldn’t love her the way I do if she didn’t work as hard as she does.
KATHERINE: You know the same people, and usually love the
same people. You are grateful for everyday you work, because you know there are
only so many people who get to work doing something they love in this industry.
I’ve wanted to work in media as long as I can remember, and seeing Roz at the top
of his game, hammering away at it everyday makes me so, so happy. I know how
hard what he does is, and he is the only person I know who could do it.

Do you ever get jealous of the attention one another receives being in the
public eye?

ROZ: No. Not at all. However, taking someone’s picture is a very intimate
procedure, and the editing process afterwords sometimes means, in any given
week, Katherine will stare at another man’s face more than mine. Also, I love
that other dudes are into my girlfriend! She’s hot.
KATHERINE: Oh god, no. It’s part of the job. I’m happy when
other people recognize how wonderful Roz is. He really is.

Best advice you’ve ever been given?
ROZ: Treat work like work! Don’t wrap your lifestyle up in it. It’s not who you
are, it’s just what you happen to do for a living.
KATHERINE: Make it about everyone else.

Any advice for other prospective media couples?

ROZ: Don’t gossip about the industry at home, realize that you’re both going to
have highs and lows at different times and ease up on the advice. Even though
you may know the industry in and out, sometimes you just need to shut up and
let your partner rant about their shit day.
KATHERINE: I don’t think we’re so different. I would give a
media couple the same advice I would give any other couple: prioritize. If your
partner isn’t adding to your life – they’re taking away from it. So work hard
to make sure they know you love them, and do your best to better their life.
Everyone wins.


What rule(s) do you live your life by?
ROZ: Just fill your house full of love and see what happens.
KATHERINE: I try to live my life according to something I
once read in a Dave Eggers novel, “more bleeding, more giving”.


Question for Katherine – Do you prefer watching Roz on TV or listening to him on the radio?
HA! Well, they’re different beasts, and he’s excellent at
both of them. But I’m a sucker for the worn-in feeling of radio. I picture
bearded men wearing track pants and hungry women in rock and roll shirts
booming the news of the world into little microphones. I went to radio school,
I worked in radio, and I love radio. Hearing Roz’s laugh when I wake up in the
morning is just about the most charming thing I could imagine.

Question for Roz – Would you rather have Katherine or someone else take your photo?

If I had my way, I’d never have my picture taken. But if I have a choice
on photographer… There is no choice. It’s her and only her.

People who love to hate everything.

Once we drove up to Casino Rama for a Joan Jett concert, and I
swear to god she stared right into our eyes, seducing us with that raspy voice,
as we sat in the front row. We both died. Then we ate steak.

Hollywood pass (i.e. the one celeb the other is given a “pass” for, should the
opportunity arise)?

Joan Jett all around.

We know many of our awesome readers are regulars of the Media, Darling column, and we’ve got a little surprise for you. This week, we asked our Media, Darling – Athena Tsavliris – a brand new set of questions to shake things up a bit!
Tsavliris is the Toronto editor of Vitamin Daily. Her writing has appeared in the National Post and Fashion magazine, among others. Home sweet home is in the Annex where she lives with her husband, daughter and wacky schnauzer, in a slightly lopsided Victorian with a pomegranate door. 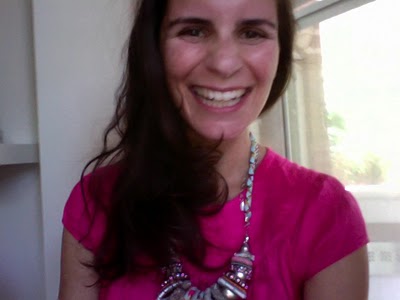 Her personal blog, La Parachute, is a scrapbook of all things pretty, quirky and unique.

How did you get your start as an editor?
I interviewed our editor-in-chief, Sarah Bancroft a couple of times for features I was writing for the National Post and Fashion Magazine. When the job came up for Toronto editor at Vitamin Daily, I contacted her directly. The fact that we already had a rapport and that she was familiar with my writing secured an interview with our publisher. I’ve been with the company since its toddler years.
If you weren’t a Media, Darling, what would you be doing right now?
As a teenager, I was always mesmerized by the eye popping window displays at Harvey Nichols. If not media, I might have worked with clothes, creating ridiculously over the top windows or sourcing costumes for the pantomime. Wouldn’t that be fun? I could also have been a manicurist, like Dita Von Teese’s mum. I can paint 10 talons (base, polish x2, speed dry) in less than 10 minutes. No smudges.
Pitching or follow up: Phone or email?
Phone calls are much more personal, but I think most people nowadays prefer email. I personally can’t always switch my focus to palazzo pants if I’m in the thick of a rice pudding recipe. If an email grabs my attention, I respond promptly. If it doesn’t, I’d rather not sit through the schpeel on why your client’s printed-rayon palazzos are the perfect breezy summer evening look.
There is one publicist I’ve worked with who’s been in the business for many years and takes a very traditional approach – hand-written notes, formally crafted emails and voicemails that are as articulate as they are brief. However you choose to communicate, do so with style and respect, and you won’t fail.
We know irrelevant pitches, calling you the wrong name and 8 follow-ups are no-no’s; what else should publicists avoid doing?
Ah yes, irrelevant pitches – hemorrhoid cream and flea repellent won’t make the cut, I’m afraid. I’m amazed at how many calls I get from people who’ve never set eyes on Vitamin Daily, so it goes without saying that publicists should read (even skim) a publication before making a pitch.
A misspelled name or addressing the wrong person is sloppy, but an open call is annoying too. If a pitch begins with “Hello there,” I can safely assume that I am one of a trillion recipients or the sender hasn’t taken the time to look at our masthead. Either way, it lacks the personal touch so integral to the journo/publicist relationship.
When you have 100 people to call in a morning I can see how it’s easier to follow a scripted pitch. But the schpeel sounds wooden and insincere, especially when I’m your 99th call.
Long, repetitive press releases, attachments and fancy fonts are other peeves.
Sunrise or sunset? Sunset.
Scent? Ren Moroccan Rose body cream.
Cookie? Walkers shortbread.
Flower? Soft peach Ranunculus.
Ticklish? Yes.
Shower or bath? Shower.
Film? Big Fish, Life Is Beautiful and Finding Nemo. I spot a theme.
Crush? Jeff Bridges
First job? Waitress. And a lousy one, at that.
Inspiration? Gosh, so many. But let’s begin and end with my family. Diana Vreeland and Iris Apfel fall somewhere in between.