You win some, you lose some as the saying goes. Here are our top PR #wins and #sins of the beautiful year that was 2012.

Wins
LEGO
Imagine you’ve been saving up for an amazing pair of shoes for over a year. Every penny you make goes to your shoe fund. Finally, you have enough money to buy them, only to find out they’ve been discontinued and all your saving has been for nothing. Well, if you had been lusting after a discontinued LEGO set, like 11-year-old James Groccia, the outcome would have been different. James had been saving money for two years so he could buy The Emerald Night Train set ($100), only to find it had been discontinued. He wrote a letter to LEGO explaining how he couldn’t afford what sellers on eBay were asking. Guess what arrived on his 11th birthday? The train set. What makes this feel-good story even more timely with the holidays around the corner, is that James has Asperger’s Syndrome, a form of autism. Not only does he love LEGO, the LEGO playgroup that he’s a part of helps improve his social skills, allowing him to socialize with kids his age. Kudos, LEGO. This is the type of positive PR that no campaign could generate.
Pizza Hut
We. Love. Pizza. Honestly, if we could eat pizza for breakfast, lunch and dinner (which we do sometimes, don’t judge) we would. That being said, we can’t say we would buy the “fresh dough with a bit of spice”-scented perfume Pizza Hut sent to 100 of their Facebook fans. The perfume received a ton of buzz and, though bizarre, was something different that stormed the Internet. We can only imagine that this has set some sort of precedent…what’s next, Big Mac mouth wash? 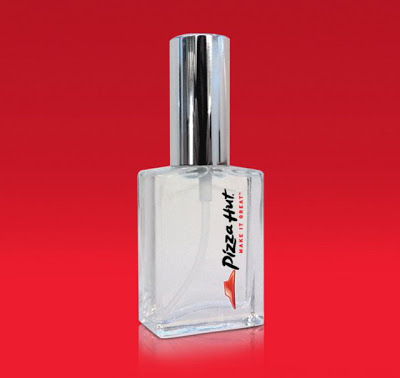 Pizza in the morning, pizza in the evening, pizza at suppertime. When pizza comes in perfume you can have pizza any time.
Image source.
Coca-Cola
A bit more experiential marketing than PR, but still awesome nonetheless. If fans/the whole world weren’t excited enough for the newest James Bond film, Skyfall, Coca-Cola went and created a Bond-like obstacle course for unassuming members of the public. Not only was this a great campaign that created (we can only imagine) amazing word-of-mouth buzz from the participants, but it was also screened as a commercial in movie theatres, furthering the hype. Living out a secret agent fantasy? Check. Well played, Coke.

McDonald’s
The McDonald’s advertising/PR campaign ‘Our food.Your questions.’ was a smart way to address all the negative press surrounding Micky Dee’s food sourcing and ingredients. Instead of a campaign where the company created and answered its own questions, McDonald’s crowd-sourced the questions, a move we’re seeing more and more often. The questions range from “Why do people on blogs say there is [sic] eyeballs in your chicken nuggets?” to “How do you make your special sauce for the Big Mac?”. Whether you believe the answers or not is a different question, but it has created the type of public goodwill the brand needed after this.

KitchenAid
When tweeting from a client account or a company account, we
can’t stress how important it is to be extra conscious of what you’re tweeting.
Save your own account for the personal, I-hate-my-boyfriend tweets. Case in point, the person who tweeted from
mega-cool brand KitchenAid’s account “Obama gma even knew it was going to be
bad! She died 3 days b4 he became president #nbcpolitics”. Yikes. First, it’s in extremely poor taste to tweet about
someone’s recently-deceased relative. Second, you shouldn’t be tweeting your own opinions from someone else’s (corporate) Twitter account, especially one that has over 30,000 followers. KitchenAid’s Cynthia Soledad stepped up immediately and assumed responsibility with the below tweets. Definitely the right thing to do in a sticky situation.

Immediately assuming responsibility for a (now fired) team member’s actions is a step in the right direction.
Image source.
Burger King
We’re not sure what possessed a Burger King employee to a)
stand in containers of lettuce b) take a picture of himself standing in said
lettuce and c) post the picture to social media. YOU’RE GOING TO GET CAUGHT. And
that’s really gross. Three employees were fired but it’s safe to say we’ll be
staying away from Burger King for a while.

Ick, salad feet.
Image source.
Chick-fil-A
This one was a doozy. President and CEO Dan Cathy made some homophobic and
anti-gay marriage comments (in the public sphere, no less) which led to the
realization that Chick-fil-A’s charity, WinShape Foundation, had donated
millions to political organizations opposing LGBT rights. Not cool. Activists
began to boycott the chain, the mayors of Boston and Chicago blocked the
chain from opening any new stores in their cities and San Francisco mayor Edwin M.
Lee made his opinions clear by telling the chain not to come any closer than their current location 40 miles away. The company has apparently now “ceased donating to organizations that promote discrimination, specifically against LGBT civil rights“, but it’s unclear whether this is true.

Muppets take a stand against Chick-fil-A.
Image source.
American Apparel
Dear American Apparel,
Do you realize people DIED during Hurricane Sandy? People
lost their homes, all of their belongings and memories. This is why you
probably shouldn’t exploit a natural disaster and have an online sale. Really? Let’s be real here, as Brian Clark tweeted, “An American Apparel
Hurricane Sandy Sale? Which 22-year-old genius intern came up with this one?”.
Preach it.

You’ve met our whole team over the past few months and now we have a challenge for you. We’ve dug through the photo archives (back when photos were printed on paper, not stored on computers), and pulled out shots of ourselves when we were in diapers.


Your challenge: Guess which chubby face belongs to which gal on the fourth floor. You’ll win tickets for two to an upcoming Canadian Stage production.


How to enter: Email your guess with the whole team matched up to the right baby to
carly.intern [at] rockitpromo [dot] com.